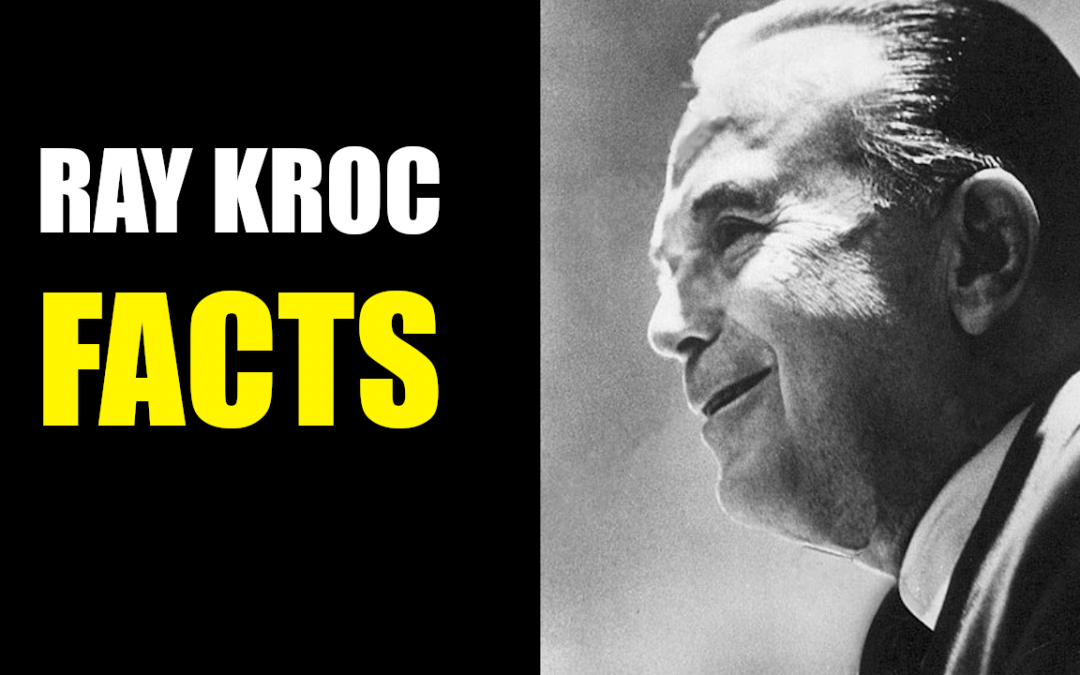 While lesser known today, Ray Kroc is easily among the most successful businessmen of the 20th century. As the founder of McDonald’s he is often studied in business schools, being recognized for changing the way restaurants are built and used. He was by no means the inventor of fast food. But a chance discovery would enable him to make a fortune in the industry. We’re talking about a man who took one small regional fast food location and transformed it into a global multi-billion dollar empire. Today the McDonald’s corporation has 38 thousand restaurants, 2 million workers, and a total market cap of 174 billion dollars. With ten Ray Kroc facts we now look at the story of McDonald’s in it’s early years.

Born to immigrant parents, his father Alois soon made a fortune by speculating on real estate. But real estate market is highly volatile, and Alois eventually lost everything. This plunged the family into poverty once more. It undoubtedly left a mark on young Ray’s psychology. Yet his father’s brief stint of success inspired him to be a lifelong entrepreneur. As a young adult he would engage in all kinds of business ventures and money making schemes. Most notably he sold paper cups, owing to their demand and cheap start up cost. He sold all kinds of small products, anything he could think of. Sometimes he would work odd jobs and experiment with new ideas.

9: Milkshakes Made Him Rich

As a middle-aged man he found a job selling milkshake making machines. Being expensive, Ray needed only sell a few machines per year in order to make a living. The job took him all across America, meeting with restaurant owners as they were his target audience. This was how he met the McDonald brothers, two brothers running their own fast food joint in California. They purchased 8 milkshake machines, requiring more to satisfy their many customers. More than the satisfaction of selling 8 machines, he was mesmerized by their restaurant. The food was perfect, and service unique. Instead of having servers, you would take the food away yourself. It was a system that worked and locals loved it. McDonald’s always had a long line of customers, desperate to get a bite of their incredible burgers.

During world war 1, Ray Kroc lied about his age in order to become an ambulance driver. While in training for this he met Walt Disney, another trainee around his age. This was long before either of them had achieved any measure of success. The war ended before they were sent overseas, but the two of them became lifelong friends. After meeting the McDonald brothers, Kroc struck a deal with them. He would now head the first McDonald’s franchise, using their formula to expand across America. At this point he wrote to his old friend Walt. Disney was now successful and in the process of setting up Disneyland. They agreed a McDonald’s restaurant should be installed in the theme park. But Disney wanted him to raise the price of meals in order to make a higher profit. Kroc refused on principal, believing it would be bad for the McDonald’s brand.

On founding the new McDonald’s corporation, Ray Kroc realized the true power and profitability of McDonald’s would not come from food sales. In his view it would come from land ownership. He set up a separate company under the McDonald’s parent corporation, a real estate company. The goal of this company was to buy the land on which McDonald’s restaurants were built, and lease that land to the franchisee. So not only would a franchisee pay an annual royalty, they would need to rent the actual land from McDonald’s too. This simply idea would form the core of McDonald’s actual business model. Today, 99 percent of their assets are physical land. This also helps profitability, with a big chunk of revenue coming solely from land leasing. This is what separates Ray Kroc and McDonald’s from other restaurants.

6: He Had Strange Rules

Ray Kroc banned the hiring of any restaurant manager who studied art at university. He believed that art was a weak subject when it came to educating business people. Many actually agree with him, and to be fair it doesn’t seem to have set McDonald’s back too far. Another set of rules he implemented were the standardization of meals sold and prices. Right down to the ingredients used, everything had to be the same. This way customer experience would be the same no matter where in America they were. It was a genius move, showing Kroc was ahead of his time. Other chain restaurants would eventually implement these same tactics, saving money and time in the process. It’s hard to not include this in a list of Ray Kroc facts.

5: He was not a billionaire

Despite McDonald’s now being worth almost 200 billion dollars, Ray himself never actually became a billionaire. By the time of his death in 1985 his net worth was around 600 million dollars. That’s a lot of money, and by converting 1985 dollars to modern dollars would actually be in the billions by now. But the fact remains Ray Kroc was never actually a billionaire himself. His wife however was 26 years younger than him and inherited much of his ownership. She did become a billionaire, with an estimated net worth of 1.7 billion when she died in 2003. That was even after she made a slew of charitable donations, the biggest of which being 1.3 billion dollars.

4: He Owned A Baseball Team

In 1974 he bought the San Diego Padres, a well known baseball team. Competing in the Major league, they have 15 winning seasons in total. The amount he paid for the team has never been made public. But according to rumor the sum was around 10 million dollars. The team was set to move to Washington DC, but Kroc stepped up to keep them in California. For that he has received much praise. But in their first year under his ownership the Padres lost 102 games in disastrous fashion. Eventually he got mad at the entire business of baseball, letting his son in law manage the team in his stead.

3: He Lucked Out On His First Divorce

Ray Kroc left his first wife shortly after founding the McDonald’s corporation. He had supreme confidence in the business and made it the focus of his live. And so he and his wife separated. In the divorce agreement he gave her everything. The house, the car, their savings. Everything but his shares in McDonald’s. He knew even a small amount of shares in the company would eventually be worth a large fortune. So Kroc was adamant not to surrender even a single share. His wife of course had not predicted the success of McDonalds so she didn’t make a fuss over the shares. And just like that she lost her chance to be a millionaire.

2: He Was Linked To Richard Nixon

Openly Republican, Kroc donated 255 thousand dollars to Richard Nixon’s 1972 presidential campaign. Many believe he did this specifically to influence Nixon to veto any rise in minimum wage requirements. This became a political scandal when a democratic senator publicly criticized him for this. It came to nothing, though.

1: He Was Not The First To Franchise McDonald’s

The last of our Ray Kroc facts. Before Kroc even met the McDonald brothers, others had realized there was something special about their restaurant. So they worked out a deal, franchising McDonald’s in another part of America. But the brothers were displeased with their new business partner. Actually they had licensed an entire 20 other McDonald’s restaurants before meeting Ray. But only Ray Kroc was able to build the company into a national force.