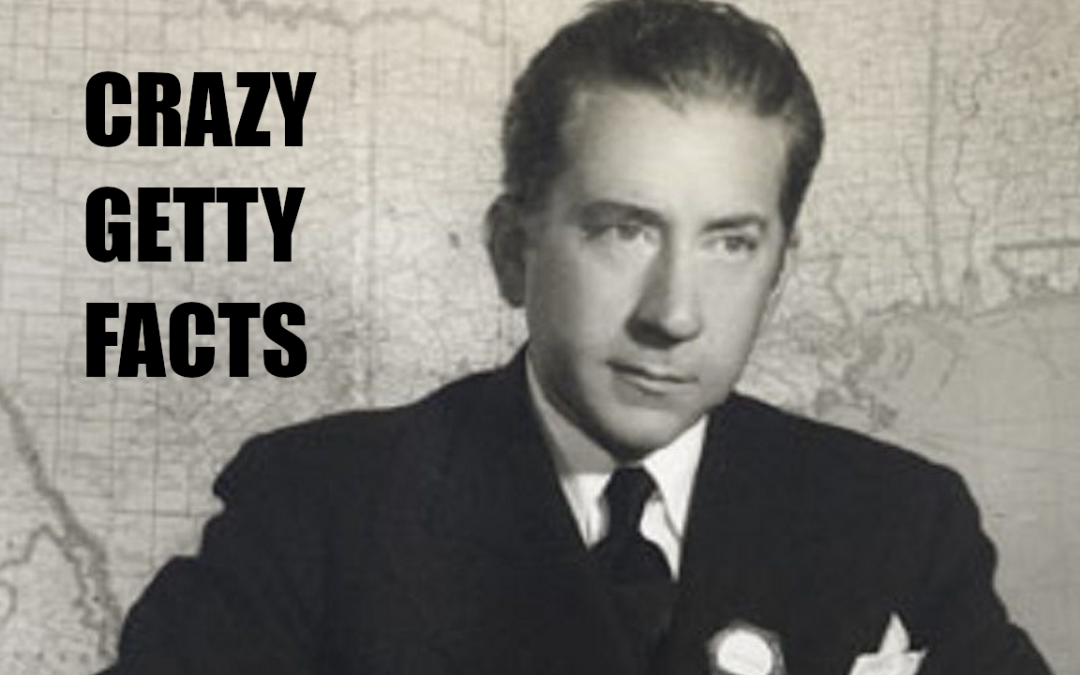 Jean Paul Getty was a true giant of industry. One of America’s most impressive business people of all time, he rode the Oklahoma oil boom of the early 20th century to become vastly wealthy. His impact on society has largely been forgotten but it you look close enough you can see it everywhere. So I could not resist the chance to write a list of J Paul Getty facts I feel everyone should know about. We have an entire generation growing up now who have never even heard the name Getty, apart from the stock image company. But that is something I cannon put up with. This man was a true innovator, one that we can learn much about business from. So here we are, the ten most amazing J Paul Getty facts.

10: He Was The world’s Richest Person

In 1966 J Paul Getty was worth an estimated 1.2 billion dollars. According to the Guinness book of records, this made him the world’s wealthiest man. When he died ten years later he was worth an entire 6 billion, further cementing his legacy as a giant of commerce. At the time 6 billion dollars was about 1/900th of America’s gross national income! And in today’s money that 6 billion is equivalent to 27 billion.

9: He Controlled Over 200 Companies

With the growth of his empire, he eventually came to control hundreds of different companies. Many of which were the oil companies that formed the backbone of the Getty family fortune. But there were many others in many different industries. Perhaps the best known is Getty Images, the still dominant stock image licensing brand. There were also hotel and real estate companies, gas stations, insurance firms, and even an aircraft company. Most incredibly he actually owned a castle! His empire stretched across the world, with businesses operating everywhere from Mexico to Italy to Saudi Arabia.

8: He Learned Business From His Father

The Getty family was not especially wealthy at the time of J Paul Getty’s birth, but they were better off than most. His father was a successful lawyer in Minnesota. But this was not enough to satisfy old George Getty. In 1903 he traveled to Oklahoma, a state still in the grip of an oil boom. There he bought the rights to extract oil from a patch of land stretching over a thousand acres. This gamble paid off, and before long they were extracting more than a million barrels of oil per year. As a young boy at the time, J Paul Getty learned a lot about life from witnessing this success story. When his father finally passed away, he inherited one third of the oil empire George Getty founded. But by that time he had an empire of his own.

7: He Became A Millionaire In His Early 20s

After returning to America, he decided to build a career separately to his father’s already existing empire. While his first effort in business was funded by a loan from his father, it was a separate venture. With a ten thousand dollar investment he purchased a new plot of land, on which he stuck oil. Within a year that new oil site was up and running, and had made the young J Paul Getty a millionaire. That was in 1915, and in following years he accumulated many more millions of dollars. Even during the great depression he continued to grow his wealth, taking advantage of the economic trouble to purchase competing oil companies. Making use of his ability to speak Arabic, he expanded into the middle east in the mid 20th century, just as the Arabian oil boom was taking hold.

6: He Was A Notorious Womanizer

Despite his deeply religious upbringing, his immense appetite for women always horrified his parents. But it wasn’t just a thing of his youth. Even when he was married, in all of his multiple marriages, his need for more women was never blunted. It got to the point where his lawyer once famously said that he “could hardly ever say no to a woman, or yes to a man”. He married and divorced five times in his life, and had many many more lovers. Some of his lovers were well respected women of society, including members of the Russian royal family. Even well into his 80s he was determined to carry on his affairs, taking drugs to do so.

5: His Last Will Was Wild

J Paul Getty long had a complicated and volatile relationship with his children and grandchildren. As they competed to become his successor, and with him not being the most present father, some of his children grew to hate him. In his will, two of his sons were left “The sum of 500 Dollars and nothing more”. He literally gave them just 500 dollars despite being one of the world’s most wealthy men. What makes this even more crazy is that many of the women he had affairs with were included in the will. Some of them received massive amounts of valuable shares in his oil company, and monthly payments for as long as they lived.

4: He Was Incredibly Well Educated

Attending both Berkeley and Oxford University, a young J Paul Getty showed a strong intellect. He spoke seven foreign languages: French, Spanish, Italian, German, Greek, Russian, and Arabic. And if that wasn’t impressive enough, he could also read Latin and Ancient Greek. They guy was cultured af. While at Oxford he befriended Prince Edward, who soon became king of England. Getty achieved a highly prized degree in economics and political science and spent years travelling the world. He learned much in this period, shaping his mindset forever.

Not the most exciting of J Paul Getty facts, but interesting none the less. The young J Paul Getty grew to love England in his days at Oxford University, and never fell out of love with her. After gaining success he purchased a large mansion in England from the Duke of Sutherland. It was a 72 room mansion where he would spend his final years and much of his life. He befriended many of the most influential aristocrats of British society and came to be accepted as one of them.

2: He Was Notoriously Frugal

Despite being one of the most wealthy people to ever exist, J Paul Getty was famously reluctant to spend any money on anything. It is said he did his own laundry by hand, just to avoid paying for it to be done, while he was a multi billionaire. He would always try to aggressively negotiate a discount for everything he purchased, hating to pay full price. While this might to some extent be common among wealthy people – rich people love to make good deals – I can think of no other billionaire quite as determined to pay as little as possible for anything. He once scorned his wife for spending too much money on the medical treatment of their blind son! But by far the most notorious incident of his frugality came after his grandson was kidnapped.

1: His Grandson Was Kidnapped

No list of J Paul Getty facts would be complete without this one. By the 1970s the Getty family were famous worldwide for their enormous wealth. But this was not entirely to their benefit. In 1973 the grandson of J Paul Getty was kidnapped by an organized crime group in Italy. The criminals demanded 17 million US dollars in return for the boy’s safe return. But there was a real problem with their demand. First, many within the Getty family feared this whole thing was organized by the grandson himself as a way of conning money out of his elderly grandfather.

Then in November of that year they cut the boy’s ear off and sent it to the Getty family, promising to keep remove body parts until they were paid. But frugal as ever, J Paul Getty flat out refused to pay them any money. Months went by, and as the kidnappers got desperate, they reduced their demand and finally J Paul Getty agreed to pay them 2.2 million dollars. The grandson was soon recovered alive. Only two people were ever convicted of the kidnapping and none of the money is recovered. It remains but one of the many bizarre stories in the history of Italian organized crime. If you want to know more J Paul Getty facts consider subscribing to my YouTube channel.