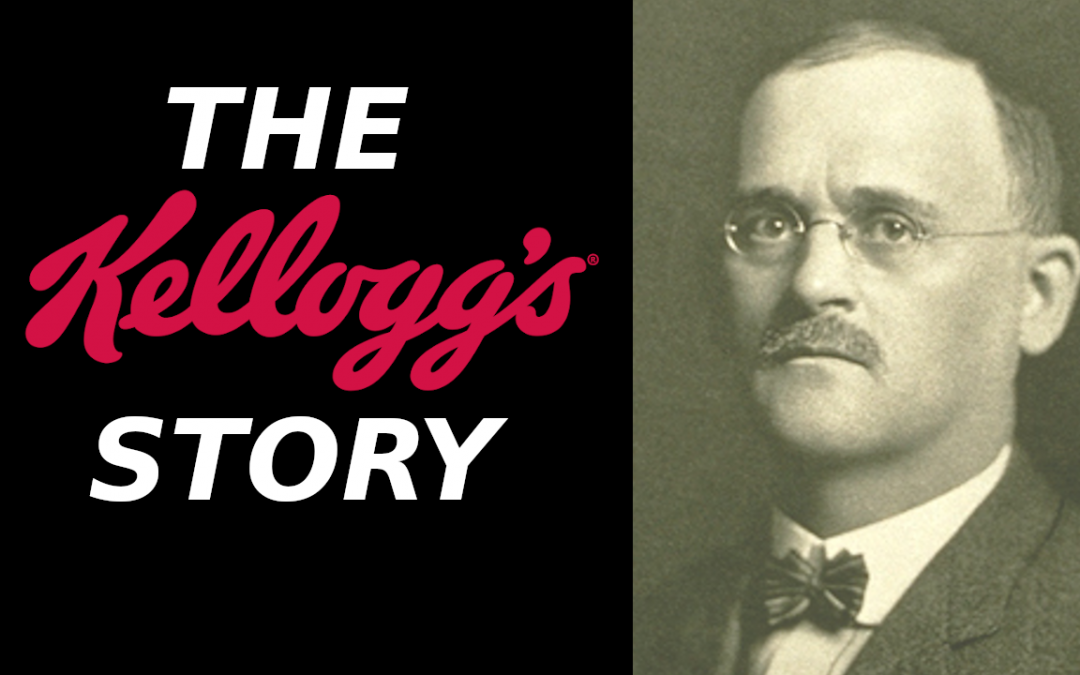 Who Was Will Keith Kellogg?

Will Keith Kellogg is best known as the founder of the Kellogg company, usually referred to as Kellogg’s. From scratch he built a small business selling rudimentary breakfast cereal like Corn Flakes. From such humble beginnings he watch as the company grew rapidly, making his vastly wealthy in the process. Today Kellogg’s is the world’s second largest snack food business, boasting a revenue approaching 14 billion dollars. The story of how Will Keith Kellogg build this extraordinary business is extraordinary in itself. Born in 1860s Michigan, it was not at all obvious he was born for greatness. But he was entrepreneurial from a young age, getting by selling brooms and other cleaning products. His father was a successful industrialist who while Will was a child established a broom factory. Doesn’t take a genius to see how Will got into the broom business.

He Ran A Health Resort

Wills older brother John was a medical doctor who in 1876 became director of a health resort called the Battle Creek Sanatorium. The health resort was gigantic, with several tall towers, hundreds of rooms, and thousands of patients. It was as physically imposing as any mental asylum of the day. Realizing how vast a responsibility running such a facility is, he invited his younger brother Will to help him do so. And just like that Will Keith Kellogg was in the healthcare business. At the Sanatorium, John was responsible more for the actual healthcare side of the business, pioneering all kinds of new treatment methods. These included heat temperature treatment, massage, electro therapy and all kinds of other bizarre experiments. While John took care of this, Will took care of the administrative side of the business. It was here he learned to manage an organization with efficiency.

The Kellogg brothers were especially concerned with the diet of their patients. They believed many of the illnesses and health issues plaguing society could be solved or reduced simply through consuming a healthy diet. Some time during this period they began to experiment with feeding their patients flaked cereal, which they themselves prepared in the kitchens. They had invented the process for creating what we now call Corn Flakes. It was actually a simple mistake that led to the original creation. The brothers were busy cooking wheat for their patients, when they were suddenly distracted by something. When their attention had returned to the food, the wheat was overcooked and stale. Clearly unable to serve stale wheat to patients, they decided to break it down into small flakes. Thus, Cornflakes were born.

It was then Will’s idea to actually try serving these flakes to Sanatorium patients, packaged up to be consumed with or without milk. In short time patients were practically begging the Kellogg brothers for more Corn Flakes. Driven primarily by a will to help the patients, John was happy not taking this any further. The patients enjoyed the cereal and that was good enough for him. But Will was much more ambitious. He realised such a cereal could bring great commercial success.

His Idea Was Stolen

In fact, he wasn’t the only one to realize this. One of the patients there soon learned their method of creating flaked cereal. That patient was Charles William Post, who after leaving the sanatorium copied their process and built a company around it. The Post Cereal company made him a multi millionaire, and by the time of his death he was worth more than 30 million. His company still exists now, owning brands like Honeycomb and Post Shredded Wheat. Seeing someone else capitalize on his idea, Will Keith Kellogg left healthcare to build his own empire.

He Built An Empire From Nothing

In 1906 Will Keith Kellogg founded the Battle Creek Toasted Corn Flake Company. That was a truly terrible name but it was the start of the name Corn Flakes. It took a lot of grit and hard work, but slowly he established a healthy cereal business. Of course, it helps that Corn Flakes were an in demand, revolutionary breakfast product. At the time people tended to eat very bland breakfasts like porridge, or a disgusting kind of mix called gruel. It was literally called gruel and was absolutely awful. So it really didn’t take much to convince people to adopt corn flakes.

In 1922 he changed the name to a much better sounding The Kellogg Company. By the end of that decade Kellogg had multiple factories working around the clock to produce an ever increasing amount of cereal. From the very beginnings it was a responsible company, making a point of employing down on their luck veterans. The very first box for Corn Flakes was made entirely from recycled materials.

The Designed The Iconic Logo

A significant element of the Kellogg brand is their well known logo. But what is less well known is that Will Keith Kellogg designed it personally, by accident. It is simply his surname signed in his own handwriting. Company lore tells he would sign every box of the cereal personally to distinguish it from non-genuine Kellogg’s cereal. Of course, this could only go on for a while. By the time the company was mass producing boxes of cereal the logo needed to be printed on mechanically. Still today the company logo is simply a computer modified version of his original personal signature.

The Brothers Had A Copyright Dispute

With older brother John seeing how much money Will Keith Kellogg was making on the cereals they collectively invented, things got ugly. While it is generally thought they developed Cornflakes together, John presented the story as if he played the bigger role in it’s development. Will told it as if John played almost no role at all. Eventually this difference in personal recalculation devolved into a full blown legal battle. It turns out John was granted a patent in 1896 covering cornflakes. In theory this meant he could put both his brother and competitor Charles Post out of business. But while he held the patent, Will copyrighted the name Kellogg, preventing John from using it. For years they competed for the legal right to produce the cereal, going to court many times.

But the dispute was futile, in the end leading to no change other than John deciding to resolve it. Their personal dispute was never resolved however. The Kellogg brothers died enemies.

He Was An Arabian Horse Breeder

Will loved horses, having a particular affection for the Arabian Horse. In fact he loved them so much he decided to professionally breed them. In the 1920s he bought a large swath of land in California to establish a ranch. At the ranch they bred some of the best Arabian horses America had to offer. Importing only the highest quality horses from Europe, their careful breeding process was among the best in the world. Some of his horses went on to become world famous, even starring in Hollywood movies thanks to it’s favorable location. During ww2 the ranch was taken over by the US army, where they trained cavalry officers.

He Built His Own Airport

The ranch was so large Will Keith Kellogg was able to build an entire airport on it. Literally called the W.K. Kellogg Airport, it was the largest private airport in the entire world until Kellogg donated the ranch to a local university. It’s the kind of casual thing Kellogg was able to just do on a whim, as was his immense wealth. It’s unclear exactly how rich he was by the time he died. But in 1934 he gave 66 million dollars worth of Kellogg’s stock away to charity. The value of that in today’s money is worth more than a billion.

He Was A Radical

Both Will Keith Kellogg and his brother John Kellogg were raised in an extremely religious family. The Kellogg’s belonged to a Christian denomination known as the Seventh Day Adventist Church. The church taught that the second coming of Jesus was imminent, and would occur within their lifetimes. This was the route of the church’ teachings, and gave rise to many of their more radical elements. One of the interesting teachings of the church was vegetarianism, which Will and John both grew up to be. It was because of this teaching they began to experiment with vegetarian foods to feed patients at the Sanatorium. You could say their radical religious beliefs were directly responsible for their success in business.