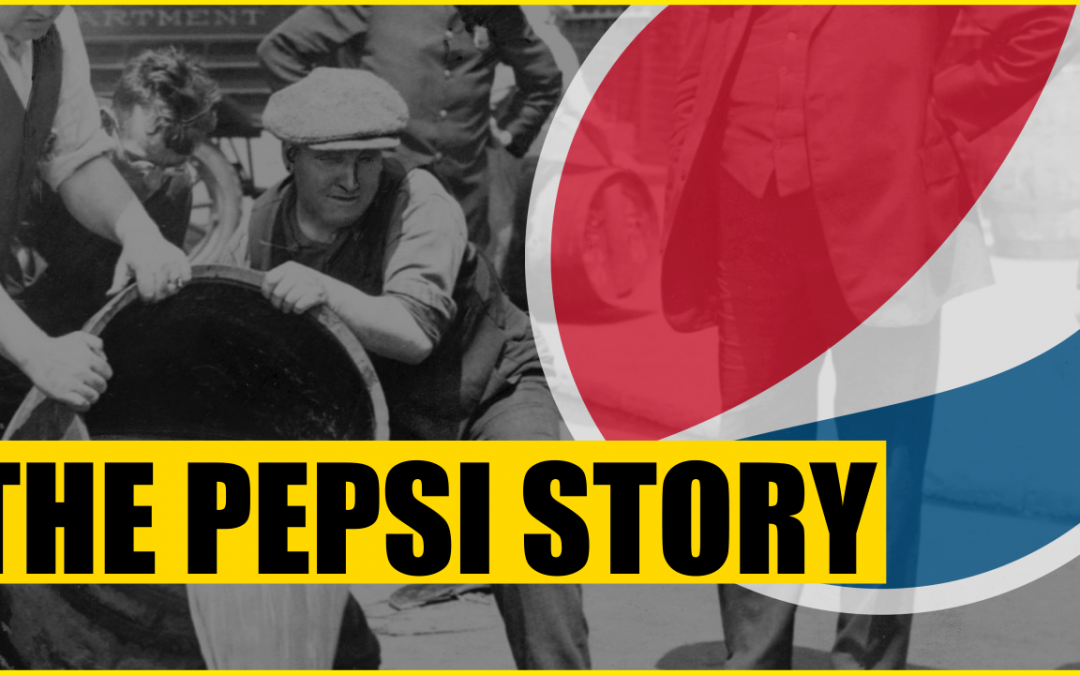 In the world of Cola there are but two big names: Coca Cola and Pepsi. Together they dominate one of our world’s most profitable industries. But there can be only one king of any industry. For generations they competed for global supremacy in what came to be known as “The Cola War”. Ultimately Coke won, but that’s no reason to count Pepsi out. PepsiCo remains an enormous global empire, owning 22 brands that each bring in more than a billion dollars per year. In 2018 alone PepsiCo had a revenue of 64 billion. This success was not destiny or a stroke of luck. It came about thanks to a gruellingly slow string of events. This is the story of Pepsi. From humble Victorian beginnings to massive global expansion, and how it eventually became the world’s 6th largest military.

It all began in the year 1886, with a man called John Pemberton. He was a complete charlatan, mascaraing as a doctor. Working as a pharmacist he sold all kinds of concoctions that he claimed would cure all kinds of ailments. After years of experimenting with cocaine wine and caffeine, he developed a soft drink that he called Coca-Cola. Seven years later another soft drink was invented, also by a pharmacist. Caleb Bradham was a fairly typical pharmacist. But sometimes he would offer customers a refreshing home made drink. Word of it quickly spread through town, and it came to be known as “Brad’s Drink”. Not only did it taste great, Bradham claimed the drink would aid digestion. Before long more people wanted Brad’s Drink than the actual drugs he sold.

The Fall of Pepsi

So he decided to go all in. But Brad’s Drink was a terrible terrible awful name. In 1898 he renamed it Pepsi-Cola – Pepsi being the Greek word for digestion, and Cola derived from the Kola nut, a source of caffeine. Bradham’s company fell even quicker than it rose, going entirely out of business. Pepsi was dead, forcing Bradham to take up pharmacy once more. But the brand name was not forgotten. In 1932 Pepsi was revived by a man called Charles Guth. Guth was an extremely wealthy executive, at one time accused of murdering his chauffeur. None the less he was successful, becoming president of the Loft Candy Company in 1930. Apparently when he was elected president, police had to intervene to stop it becoming violent. Loft was America’s largest candy company, owning a massive chain of stores from which they sold cola.

When the coca-cola company refused his demand of a massive discount, he decided to revive pepsi and sell that instead. But even with Loft Candy behind it, Pepsi just couldn’t compete with Coke. Proceeding decades had seen coke take an iron grip on the industry. So before long Guth went back to Coke, offering to sell the Pepsi brand to them. At a knockdown price, Coke now had the opportunity to buy their greatest rival – an opportunity they wasted. In truth it was the third time they had been offered the chance to buy Pepsi. But they just didn’t see any value in it. 1920s prohibition had pushed the soft drink industry to new heights. And coke had been at the helm.

With his offer rejected by coke, Guth went back to the drawing board. He introduced a new bottle, twice as large as those used by coke. This combined with an innovative use of radio commercials gave new life to Pepsi. In fact the first radio advert jingle in American history was used by pepsi. It was a simple tune, making clear that a bottle of pepsi was much larger than her competitors. As by now the great depression had ravaged North America, this strategy paid off. Coke was clearly the stronger brand. But stuck in their ways, was unable to change and adapt as quickly as Pepsi could. Pepsi sponsored up and coming stars of Hollywood, which itself was growing astronomically. One of the biggest names in Hollywood, Joan Crawford, even married the CEO of Pepsi.

With the expansion of television they were equally effective with on screen ads. Slowly but surely Pepsi ate into the market share of coke, causing great concern to their rival. A big part of their strategy was specifically marketing to black people. Recognising that other corporations largely neglected the black community, Pepsi saw them as an untapped market. The genius of pepsi going back to the 1940s was to target that market. They employed all kinds of tactics. From hiring all black sales teams to running ad campaigns featuring black scientists. For a corporation to do this in the 1940s and 50s was a big deal. But it was also a big risk – one that paid off.

The best they got from these campaigns helped them surpass coke in markets like Chicago. And the more they grew, the more aggressively they dove into advertising campaigns. But when it came to international expansion they simply couldn’t compete. Sure pepsi had long had a presence outside of the USA, but it was nothing like that of Pepsi. But then they conceived of a way to tap into a new market: the Soviet Union.

Pepsi In The Soviet Union

At the time trade with the Soviets was minuscule. In fact, no capitalist product had ever been sold legally on Soviet soil. But pepsi was undeterred. By persuading US diplomats to introduce Soviet officials to the drink, they achieved what many thought to have been impossible. It took ten years of negotiation, but eventually pepsi-cola was introduced to the Soviet Union, a feat rival brands could only dream of. As the Soviet currency was basically worthless, Pepsi instead exchanged their product for commodities. At first it was for vodka, but soon for military equipment. In time Pepsi received 17 submarines, a frigate, a cruiser, and an entire destroyer from the Soviet Union. By some measurements this made them the 6th largest navy on earth.

In the mid 1980s they came genuinely close to overtaking Coca-cola. They had an almost equal market share with coke, thanks to decades of innovation. Then in 1985 came another stroke of luck. Coke briefly changed it’s formula.

End of the Cola War

In what’s been called the biggest PR disaster of all time, coke received massive backlash and a huge drop in sales. Pepsi became the number one selling cola globally, declaring victory in the cola war. But realizing their blunder, coke soon reintroduced the old formula, reclaiming their spot as the number one brand. At the end of the day the coke brand is just stronger. In blind taste tests, people tend to prefer the taste of pepsi. But in tests when participants know which drink is which, people tend to prefer coke. This has been well studied – it’s known as “The pepsi paradox”. Something about the actual branding of coke causes people to enjoy the product more than they otherwise would. And so, it was but a brief moment that pepsi was on top.

Yet pepsico still went on to do some incredible things. For a time they owned KFC, Taco Bell, Pizza Hut, and Wilson Sporting Goods. Still today they own some of the best known consumer brands. By continuing to innovate even today, PepsiCo remains only surpassed by Coca-Cola. They are active in almost every country, employing more than a quarter million people, and having a net income north of 12 billion dollars.