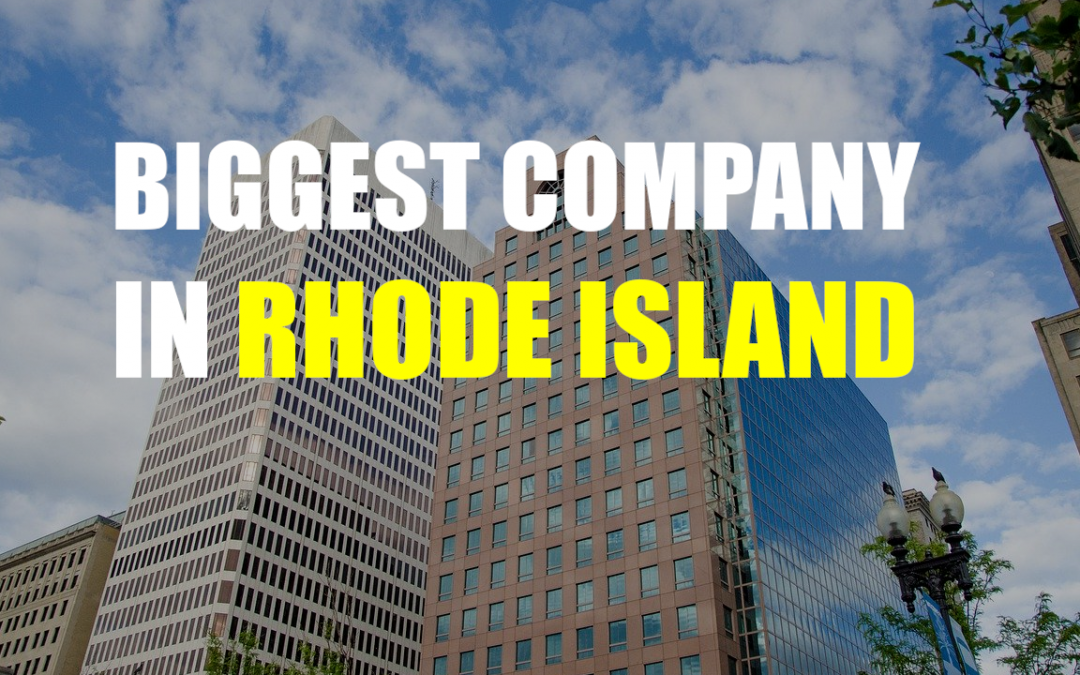 Rhode Island is not exactly a giant of commerce. In fact, it’s not a giant of anything, literally being the smallest US state by land area. Yet she is home to more than a million people, making her the second most densely populated state in the union. It’s large population is partly due to it’s long history. Rhode Island was among the original 13 colonies of America, and actually the first to break free from the British Empire. Over time, more and more people gradually settled and were born here. So it would not surprise you that many wealthy residents can now be found here. But many of those residents actually made their fortune right here in Rhode Island, building their own businesses. In this article we look at just one of those businesses, the biggest company in Rhode Island.

There are many large corporations to be found in Rhode Island. Among them are Citizens Financial Group, a bank with annual revenues in the billions. Another is United Natural Foods, a food wholesaler with a revenue of around 20 billion dollars! Both these companies are based in Providence, the largest and capital city of Rhode Island. But the biggest company in Rhode Island is based in a city you’ve probably never heard of. The city is called Woonsocket, and the company is CVS Health.

The Rise of CVS Health

The term CVS stands for Consumer Value Stores, and reflective of this name, it is now one of the largest retail pharmacy chains in the world. But the origins of this company are strikingly humble. It all began in 1963 when three friends established the very first CVS store. Gradually their store grew, selling a wide selection of medicines and beauty products. By focusing more of beauty products instead of purely on medical supplies, in contrast to most other pharmacy stores at the time, they were met with massive success. Within a couple of years they already had a chain of over two dozen stores. Seven years after the initial CVS opening, the company boasted 100 stores, marking their first major milestone. That was in 1970 and the coming decade would see massive growth for CVS.

In 1972 the company acquired another pharmacy chain, a move that gave them another 84 locations. Up until this point the chain was really only focused on Rhode Island and the surrounding area. But now this acquisition gave CVS a presence in other states like Indiana. Gradually CVS spread it’s tentacles across America like some kind of giant octopus. As the decades went on they opened up new stores in new locations and regularly purchased larger and larger operations. In the year 1990 alone they purchased 500 stores, with the acquisition of a retail chain called Peoples Drug. By now CVS was well on it’s way to becoming the biggest company in Rhode Island and showed no signs of slowing down.

As The Biggest Company In Rhode Island

Despite it’s ever growing presence across the United States, it never relocated it’s headquarters outside of Rhode Island. In 1997 they purchased another pharmacy chain called Revco. The 2.8 billion dollar deal brought CVS an additional 2500 stores! Having gone bankrupt recently before this, CVS saw buying them out as a win-win solution that would remove some competition and compensate Revco owners. In 1999 CVS took advantage of the dot com boom, purchasing the world’s first online pharmacy. While this new business would not last very long, it was the first step in establishing CVS’ own online operation that still exists today. Further capitalizing on market trends, they introduced a loyalty card program in 2001. By the end of the year they had 30 million members! In 2004 they absorbed another 1200 locations with the acquisition of yet another drug store chain.

It should now be clear how CVS became the biggest company in Rhode Island. Over time they just purchased more pharmacies and drug retail chains. Then in 2018 came their largest move. In that year CVS purchased a gigantic health insurance provider called Aetna. In the 69 billion dollar deal, CVS gained full ownership of the company. This gave them an additional 50 thousand employees, and more than 30 million healthcare clients. Hence why the corporation is called CVS Health.

CVS now have more than 9,900 stores and 300 thousand employees. With consistent growth, their revenue now stands north of 255 billion dollars and their total assets are valued at more than 222 billion. Yes, in the many decades of it’s existence, CVS has grown from a three man operation mom and pop store to being the 19th largest company in America.